As part of our 10th year birthday celebrations we’re looking back at some of the organisations we’ve helped over the years to become vibrant social enterprises and community businesses. We thought that we’d highlight Moseley Road Baths as they re-open to the public today (04/05/2021)

Standing proudly with its red brick exterior, the Edwardian baths opened in 1907 with two public swimming pools and slipper baths in the heart of Balsall Heath. Whilst many of the original features remain intact, the building has been under threat of closure for decades due to underfunding and the scale of ongoing maintenance. 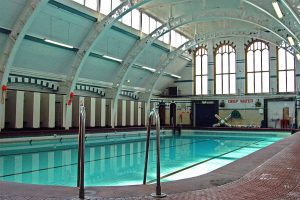 Major structural problems saw the Gala Pool close in August 2003, but it was the local authority’s decision to shut the building in March 2017, as part of the city’s new leisure strategy, that led Moseley Road Baths Action Groupto step in to prevent local swimming being lost forever.
A successful application to the Bright Ideas Fund matched the group to approved business consultants Development in Social Enterprise CIC (DISE) who had previously assisted Castle Vale Library and Castle Vale Pool move into community management.

DISE worked with the group to develop a viable proposal to keep swimming open at Mosely Road Baths using a part-staffed and part-volunteer model which was already working at Castle Vale Pool and community run leisure facilities elsewhere.
The business plan formed the basis of discussions with Birmingham City Council which subsequently saw the newly formed Moseley Road Baths CIO secure a licence to operate from 1st April 2018.

Chair of Moseley Road Baths CIO, Karen Leach said: “DISE’s experience of assisting similar community enterprises within Birmingham gave us the confidence that we had an achievable business plan that would satisfy the Council’s requirements and ensure that our greatly valued local heritage swimming facility remains for the benefit of local people.”DISE continued to provide advice and support which led to additional funding for business development to operationalise the business plan, recruit volunteers, fundraise, train lifeguards, and promote to users.
We wish them well as they re-open today, “May the fourth be with you”!Download our case study here